#Comrades: Veteran runner will not stop anytime soon thanks to HYF and other supporters

#Comrades: Veteran runner will not stop anytime soon thanks to HYF and other supporters

WESTCLIFF – Fifty-year-old Isaac Mbele is entering into his fifth Comrades Marathon on 10 June and he is not ready to quit yet.

It’s Comrades Marathon fever and 50-year-old veteran runner Isaac Mbele, who works in Westcliff, is ready and set for his fifth one coming on 10 June. The security guard will join about

23 000 runners who will take on the tough 90km ‘down run’ from Pietermaritzburg City Hall to the finish line at the Moses Mabhida Stadium in Durban on the day.

One of the inspirations behind Mbele’s running is the memory of his late sister, Gloria Zulu, who died of cancer. “After my sister and many other friends in the community were diagnosed, it has been my goal to raise breast cancer awareness through my running,” he said.

So in support of the countless women struggling with the disease in South Africa, Mbele always runs with the breast cancer pink ribbon pinned to his vest.

His community also inspires him as he managed to raise R2 000 this year for the girls in his home community in the historic town of Bethanie in the North West. “These girls often miss school and sadly stay at home because they do not have access to personal products like sanitary towels. Girls can miss up to a year of school because of that,” Mbele stated. He plans to visit his community in Bethanie after the Comrades to go and deliver the products.

Mbele loves running so much so that he runs to and from work every day regardless of the weather “I wake up excited for my morning run to work. The route from my home in Emmarentia to Westcliff is about 5km. I leave my house at around 4.15am in order to start my shift at 5am. 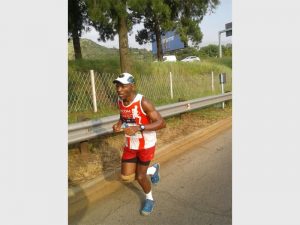 “I simply love the run up the hill to my Westcliff job, reflecting on how peaceful and truly beautiful my neighbourhood is.”

He competes in numerous marathons during the year and has crossed the finish line in over 70 races since he started competing in 2003.

Every Wednesday and Saturday, Mbele meets his running squad which he calls ‘Harambe Running Squad’ which means ‘pulling together’ and working as a team, either at Emmarentia Dam for a 10km run or the Westcliff stairs to build strength and fitness as well as enjoy the beautiful scenery.

Mbele completed a 15km marathon in Boksburg in one hour and nine minutes.

“I’m proud of every medal I’ve won. As long as my legs will carry me, I’ll never leave the game of running,” Mbele concluded.