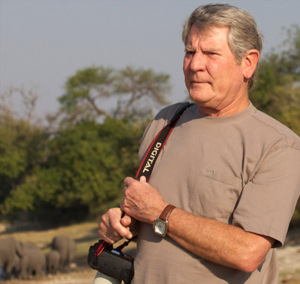 Acclaimed wildlife photographer and conservationist Gerald Hinde generously donated a portfolio of photographic art to the HYF for charity fundraising.

Gerald Hinde (72) spent 30 years as a director of a large family business before leaving his business cares behind in 1989 and taking up a new career in the African bush.  He  is one of the most respected wildlife photographers in the world and has an unequaled passion, love and respect for the bush. He has ventured into some of the most untamed places on earth from Leroo la Tau in Botswana to the desert of Soussevlei in Namibia.

His photographs appear in his book titles Gamedrive, Leopard, An African Experience and Africa’s Big Five, Images from a Timeless Wilderness, Catching the Moment and Cats of Africa.  His work has been published widely in national and international magazines, coffee table books and on calendars and postcards.

Included in the donated portfolio is a limited edition of 20 numbered photographs signed by the artist himself, titled ‘Leopard Conservation Under The Spotlight’. Limited Editions 1-11 have sold with 12-20 available in the HYF Shop.