Ask Jason Hinde what pink means to him and you’ll probably be surprised by his answer. Jason – a 16-year-old student at St John’s College, Jhb and the founder of the Hinde Youth Foundation – is passionate about fund raising, through his Foundation, HYF – https://www.hyf.co.za.

HYF teamed up with Estee Lauder and Hydepark Corner to raise funds and awareness for The Estée Lauder Companies 2015 Breast Cancer Awareness (BCA) Campaign, this year benefiting the Look Good Feel Better Foundation. Working together, the powerhouse trio managed to co-ordinate a series of events, including an Art Exhibition organized by HYF.

In addition to raising money for a good cause, the exhibition also gave artists from Assemblage Foundation and Art Afrique the opportunity to exhibit their work and earn by taking a percentage of their art sold. HYF and Alive Art donated the framing of all the art pieces.

“The EL BCA campaign is a cause close to my heart, as my mother made the transition to a breast cancer survivor earlier this year,” says Jason. “After supporting her through the difficult time, I made it my calling to encourage kids, to in turn encourage their mothers to get checked annually, as early detection can save a mother’s life. The campaign has, in part, been empowering people around the world to take action, by doing various initiatives, to contribute in fighting the breast cancer battle”.

The Estee Lauder Companies 2015 BCA Campaign believes that each action – big or small – counts in the fight against breast cancer and invited people around the world to join a global digital community, by sharing their actions on the EL website, to bring us all closer to a world without breast cancer.

All proceeds raised were donated to the Look Good Feel Better Foundation, dedicated to improving the self-esteem and quality of life for people undergoing the treatment of cancer.
As part of its Global Landmark Illumination Initiative, in which historical landmarks were illuminated in pink worldwide during October 2015 BCA month, Hyde Park Corner was lit in pink, joining the Eiffel Tower in Paris, The Empire State Building in New York and other landmarks in Mumbai, Dubai, Warsaw, Chile, Milan and Munich. The first lighting of Hyde Park Corner in support of Breast Cancer Awareness Month aimed to draw focus on the importance of breast health and early detection. 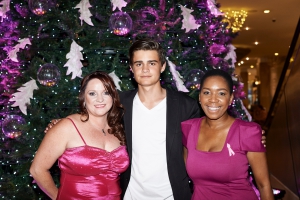