My great uncle Gerald and I have always shared the same passion, love and respect for the African bush. Growing up, I remember spending many unforgettable weekends with the family at wild game farms across Africa – identifying spoor in the sand, photographing elephant, lion and rhino at waterholes and the incredible first encounter of a lioness taking down her prey. 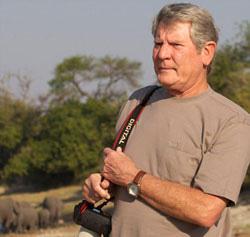 Gerald is one of the most inspirational people I know. He spent 30 years in the corporate world before leaving his suit and tie behind in 1989 and taking up a new career in the African bush. He has ventured into some of the most untamed places on earth from Leroo la Tau in Botswana to the desert of Soussevlei in Namibia. He’s also one of the most talented photographers I’ve ever met, and I’m not just saying that because he’s my great uncle!

Gerald was instrumental in me creating HYF, which was born after a chance encounter I had one day with a mildly tame leopard named Salati at a country lodge near Pretoria. Salati opened my eyes and my heart to the plight of Southern Africa’s leopards and rhino.

When Gerald heard of my intent to raise funds for leopard and rhino conservation he generously donated a portfolio of photographic art – a limited edition of 20 signed and numbered pieces by the artist himself, titled ‘Conservation Under The Spotlight’. My biggest goal at the time was to educate people about leopard conservation. Leopards are endangered and it’s illegal to kill them.

Gerald has won a string of photographic awards in competitions, including the BBC Wildlife Photographer of the Year Competition, Afga Wildlife Awards, UN Environment Program, International Wildlife Photographic Competition and the Fuji Profoto Awards. He is the author of many coffee table book titles and responsible for the magnificent photographs in them – Gamedrive, Leopard, An African Experience, Africa’s Big Five, Images from a Timeless Wilderness, Catching the Moment and Cats of Africa. His work has also been published widely in national and international magazines, Getty images and videos and on calendars and postcards.

We sold and auctioned off 11 of Gerald’s art pieces and with the money raised, also donated to children’s education – with one of them selling for over R83,000 on auction.

Recently, Gerald donated a collection of spectacular photographs to aid HYF’s efforts in raising funds for breast cancer. These photographic art pieces are available in the HYF SHOP and all proceeds will be donated to cancer.